FOR IMMEDIATE RELEASE
ARP Demonstrated non-destructive sub-surface scanning
with 1 nm resolution
Harrisburg, PA, November 21, 2011 — Applied Research & Photonics (ARP) (http://arphotonics.net) has demonstrated its terahertz technology at the Eastern Analytical Symposium (EAS).  ARP's new product, TeraScanR (TSR), can scan the inner layers of a multilayered structure with 1 nanometer resolution in a non-invasive way. There are challenges to quantify analyte concentration profile in the inner layers. Terahertz interaction with materials provides much higher sensitivity because the probing frequencies are sensitive to the vibration of molecules as a whole as opposed to just a bond or torsion.  ARP’s TSR has received the 2011 Innovation Award from the CLEO/Laser Focus World: http://www.cleoconference.org/home/news-and-press/cleo-press-releases/cleo-press-releases-2011/applied-research-and-photonics,-inc-receives-2011/ 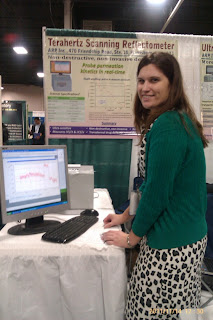 Dr. Amanda Norbutus scanning her rock sample by ARP's TSR at the EAS expo.
Functionality of Terahertz Scanning Reflectometer
A proprietary CW terahertz source is used that generates the terahertz radiation from an electro-optic dendrimer.  The terahertz beam is focused on to the specimen at normal incidence.  The specimen cell is equipped with a scanning platform that allows direct measurements as follows.  The off-axis parabolic reflector is adjusted such that initially the terahertz beam remains focused on the substrate surface.  At this position the motion control can be engaged for scanning the substrate to interrogate the reflectance across its thickness; this gives the concentration gradient, dC/dx, when the blank substrate is used as a reference. However, when the beam remains focused at the surface and the motion control is locked at that position, then the ingredient may be applied on the blank substrate to let it permeate while the reflectance is measured in real time.  In this case the reflectance is directly proportional to the rate of permeation of the ingredient across the substrate, dC/dt.  Knowing both dC/dx and dC/dt, the diffusion coefficient can be calculated directly from the Fick’s second law.  All measurements of the TSR are controlled by the front-end interface with a Windows PC.
About Applied Research & Photonics
Located in Harrisburg, PA, Applied Research & Photonics, Inc. (ARP) is a nanotechnology company with the core products in the terahertz area.  ARP has demonstrated a number of products based on its proprietary dendrimer based nanotechnology.  ARP’s terahertz spectrometer, TeraSpectra, uses a high-power terahertz source enabling high resolution spectrometry.  It has a wider terahertz range (up to ~30 THz) for probing molecular phenomena on time scales from a few femto-seconds to a few tens of pico-seconds.  Designed and manufactured in Harrisburg, TeraSpectra offers the capability of solving a number of problems in biomolecular, pharmaceutical, analytical and other research areas.  ARP is also working with the US Department of Homeland Security to develop remote detection of explosives for anti-terrorism applications.  For more information, visit ARP web site at: www.arphotonics.net or contact:

Posted by TeraSpectra_PA_US at 1:36 PM No comments: